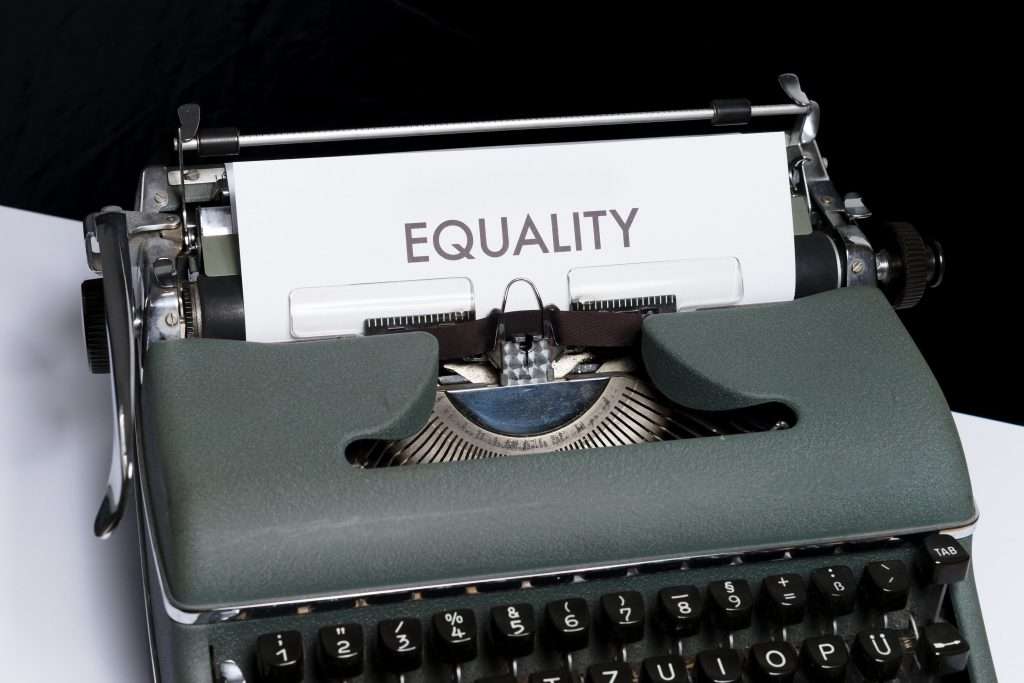 By Olivia Leahy – Volunteer Writer at not only pink and blue

Happy International Women’s Day – and welcome to our first blog post of 2022. It seems fitting that our first blog of the year is reflecting on this important global celebration of women through our event that we held last week with Ducky Zebra called “Breaking the Bias in Early Years to Grow Generations Equals.”

This post will recap the webinar, further expanding the critical and thought-provoking discussions that took place and celebrating the panellists and resources shared that really made the event remarkable.

We would like to start by once again thanking our co-host  Sally Dear from Ducky Zebra; and our incredible panellists: Jess Day from Let Toys Be Toys; Kerrine Bryan from Butterfly Books; Han-Son Lee from Daddilife; Carren Gestetner from Lifting Limits; and Natalie Costa from Power Thoughts. Without them, such a stimulating conversation would not have been possible. We would also like to thank all those who joined us for the webinar and for all their questions – these really opened up our discussion to what mattered to those watching in the run up to International Women’s Day.

The webinar ran as two forty-five minute panels: the first focussing on combating stereotypes and breaking the bias in children’s retail, specifically clothing, toys and books; the second concentrated on dealing with gender stereotypes in parenting, looking at the impact of stereotypes on both children and parents, with a particular focus on careers and aspirations.

Panel on Breaking the Bias in Retail

Our International Women’s Day event kicked off with our amazing Retail Panel, chaired by our founder Clare Willetts,  consisting of Sally Dear, Jess Day and Kerrine Bryan. This panel openly explored the gender stereotypes placed on children’s clothing, toys and books and discussed the serious consequences that these perpetuated norms have on childrens’ abilities to reach their full potential. Discussions surrounding the boy/girl divide in toy manufacturing and advertisement, the lack of gender representation in different careers in children’s books, and the peer-to-peer policing over clothing that takes place amongst children, were had. Here further detail from each of our inspirational panellists.

Sally, our co-host and the founder of Ducky Zebra, whose mission is to inspire kindness and confidence in children and provide colourful, unisex, sustainable clothing, led a fascination discussion surrounding messaging on children’s clothing. She raised the really important issue of the divide in messaging on boys and girls clothing which plays into the harmful gendered stereotypes we see throughout society.

She observed how messages for boys ooze confidence and bravery like “total rebel” and also contain animals deemed as predators like tigers and dinosaurs. Girls, on the other hand, are presented with clothing with slogans like “super cute” and “daydreamer”, promoting passivity and materialism, with animals seen as victims like bunnies. Sally also addressed the real issue of children struggling to do something that their peers challenge them for doing, like wearing clothing deemed only suitable for the other gender. Sally referred to her own son as an example, explaining that “my son, his favourite colour used to be pink. We went shoe shopping and he chose a pair of bright pink trainers. He started school and his friends … pointed out to him, that these trainers were for girls. …. Pink is no longer his favourite colour. And he’s decided that it’s just easier to fit in with what is expected of him.”

Jess Day from Let Toys Be Toys, who aim to get retailers and publishers to remove gender labelling from toys and stores, reflected on the limiting effect that stereotypes have on the way that children play, and therefore learn and develop. Jess highlighted how play and thus toys are vital in crafting children’s identities and having control over their own lives. By giving children social, stereotyped cues in what they can play with and who they can play with, gender stereotypes begin to shape their choice making. Jess explained that by retailers gendering toys, “it sets children and their families up to look for these gendered cues as a guide to decision making, and when it’s about a chair or a cup it isn’t that big of a deal. But when you start feeling that you have to apply that as a lens to your decision making in every part of your life, it starts to become harmful very, very quickly. … It very quickly puts very very tight limits on the decisions that children are able to make.”

Kerrine Bryan, founder of Butterfly Books, a publishing company looking at representing different genders in all career options in books for children, brought to our attention the misconceptions surrounding who could pursue certain careers. Kerrine explained how these misconceptions, which stem from gender stereotypes, started in really young children and that her business stemmed from the desire to find resources to easily address the misconceptions and biases in certain industries. Kerrine revealed that “By limiting children’s view of what they can and can’t do, or can and can’t wear, you are also limiting their ambitions. If they never see a female engineer or female scientist, or a male nurse, then they’ll never think that that’s an option for them.” Kerrine sees the key to shattering these biases, in the education of children; educating children on their career options from an early age so that they are not restricted by biases when they are older, results in their ability to fill their full potential in life.

Panel on Breaking the Bias in Parenthood

The second of our International Women’s Day panels was the Parenthood Panel, again chaired by Clare Willetts, featuring Han-Son Lee, Caren Gestetner and Natalie Costa. This panel explored the need for allyship in the chase for more equalised roles at work and at home for every parent, the need for children to learn to question and criticise stereotypes in order to not be restricted by them, and the benefits of normalising all emotions in every child so that gendered stereotypes at not perpetuated through limiting emotions. Here are some of the highlights from each of our incredible panellists.

The Parenting Panel began with a discussion led by Han-Son Lee from Daddilife; the mission of Daddilife is to change the way the world sees Dads – not as a secondary parent but an equal one both in the workplace and in the home. Han-Son shared the startling statistic that “52% of dads experience tension from their employers in the first year of their baby’s life, specifically in relation to parenthood.

I think a lot of people will be surprised by that because we often think about that kind of tension and parent tension, and parenthood and coming back from maternity leave, is with women and that kind of tension there. But you’re finding it with dads too.” Modern-day dads are far more active and far more equalised in their parental role than ever before, which has led to a more open conversation surrounding flexible working. Flexible working is something that modern-day dads are interested in, but the rates of actually being able to engage in flexible working as a dad is low. Han-Son revealed that age hugely affects whether a dad is successful in achieving flexible work; the more senior a dad is in his role at work, the easier it is for him to craft his own flexibility, whilst younger dads have a far lower acceptance rate of flexible working.

Caren Gestetner of Lifting Limits, a charity whose mission is to challenge gender stereotyping and promote gender equality through working with children in schools, echoed the notion that stereotypes limit children’s aspirations. Caren identified that younger children, aged three to five, had the most gendered attitudes, revealing just how early stereotypes affect children. But at such a young age, children are not completely aware of stereotypes and need to be educated in order for their aspirations to not be restricted. Caren explained that “Unless children are made explicitly aware that those are stereotypes and are taught about them, they [stereotypes] are just actually part of the way the world is for children.” Young children do not yet have the language or the ability to find the language to articulate how they are affected by stereotypes, but they are highly likely to be feeling the effects of them, even if they cannot verbalise it. Caren revealed how school environments too preserve existing stereotypes through the curriculum and expectations, of boys being louder and girls being more helpful; stereotyping all over schools are constantly perpetuated below the radar and start to affect what roles children see for themselves.

Natalie Costa from Power Thoughts, a teaching and coaching service which looks into tapping into the power of childrens’ minds so as to teach them to be confident and resilient, drew on the importance of expanding on children’s emotional vocabulary in order for their emotional literacy and understanding to develop. The acceptance of differing emotions in boys and girls is detrimental to their emotional wellbeing. Natalie illustrated how “It’s acceptable to express certain emotions and it’s not acceptable to show other emotions as I’ve found. So you know, typically with boys … it’s okay for me to express my anger, and I can show all these angry feelings, but it’s really difficult to express those more vulnerable feelings. And with many of the girls that I work with and come to me … they really struggle to speak up for themselves and to have that sense of confidence.” Natalie revealed how we must be mindful of how stereotyped emotions impact children emotionally and how important it is to support them, by validating their feelings, giving them a voice and supplying them with the right tools to deal with every emotion.

This webinar was not only insightful and compelling because of the amazing panellists and important topics addressed, it was also astounding due to the staggering amount of resources shared amongst the panellists and audience members. We could not let those get lost in the recording so we have shared them below in order to keep this important conversation going on such an important international celebration of women. So today, on International Women’s Day, here’s to breaking the bias in early years to grow generations of equals.

Resources suggested by you

We would like to thank you all for your contributions to our International Women’s Day event on Breaking the Bias; and especially for the resources you shared with us all in the webinar chat. We have collated these below for your reference:

The Benefits of Doll Play for Empathy – research by Cardiff University

The Problem with ‘Boys Will Be Boys’ – article by HuffPost

End Sexism in Schools is currently working on promoting women’s voices through literature in secondary schools. Their statistics are coming out in full soon.

For more resources take a look at our resources page.